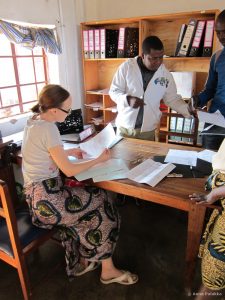 Lungwena Child Survival Study (LCSS) is an observational, prospective cohort study, carried out in the Lungwena area in Mangochi District, Malawi. The aim of the study is to describe health and its determinants among women and their children and to identify factors that might either promote or hinder healthy growth and development among pregnant women, children and adolescents in rural Malawi.

A total of 795 pregnant women were enrolled to the cohort study in 1995 – 1996. The women underwent an obstetric examination monthly until delivery. Delivery events were recorded right after birth and birth weights were recorded for those babies who were born at a health facility. All children were visited at home monthly until 18 months of age and then every three months until the age of 5 years. At the age of 5, 6, 8, 10, 12 and 15 years, the children were examined at a health facility. The study was continued at the age of 21 years as Lungwena Young Adults Study (LYAS). At the beginning of the follow-up, data collection was centered around nutrition, growth, morbidity and mortality. Subsequent data collection rounds have added elements of lung health, social and emotional wellbeing, school performance and development.

Results from this study have been described in several scientific publications and PhD theses. The main findings that have led to subsequent intervention trials include a very high incidence of and adverse consequences from preterm birth and infant and child stunting.