Why do we use this image for a research group concerned with digitalization?

An explanation of our logo.

It may seem strange that we have a picture of a mechanical device as the image on our homepage, we are after all concerned with investigating the digitalization of education.

The machine in the picture is a carding machine, a device that is used in the process of untangling the fibres of wool or cotton so that they can eventually be spun and turned into cloth. The carding process dates back to India in the second century, with handheld bow like instruments, but was mechanised in the late 1700’s and early 1800’s during the industrial revolution.

Our use is, of course, partly a play on words based on the acronym for the research group (CARDE), but it would seem to be wholly appropriate as the process of carding involves disentangling, separating, cleaning and then intermixing fibres so that they can be better used in the cloth making process. In a similar way we seek to disentangle the many complexities of digitalization in education, to examine them and attempt to make them into a coherent ‘cloth’.

This is also reflected in our logo.

Both the image and logo are representations or metaphors for our work, we do not stand against digitalization, we are not from the Luddite tradition, but neither do accept uncritically the prevailing narratives that surround digitalization and datafication in education.  We seek to disentangle and engage with these narratives, to examine them to gain a greater understanding of the issues.

The carding machine played a key role in the industrial revolution and that history is also tied to the history of the city of Tampere, where the research group is located.  James Finlayson brought the technology to the city in the early 1800’s and a local museum has a machine he installed in the Finlayson building in 1824 on display.   It therefore seems apt that we should adopt this image as our bridge from the industrial revolution of the past to the digital revolution of the present. 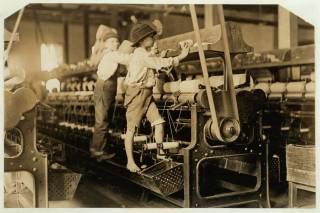 Let us not forget that children were often used in the operation and maintenance of these machines, often becoming injured or worse as small hands and bodies got caught in the machinery.  We hope that our engagement, our “carding” of digitalization will help ensure that young minds and bodies are not injured by the machines we choose to use.

Excerpts from Satanic Mills, a poem by Jess Peterson