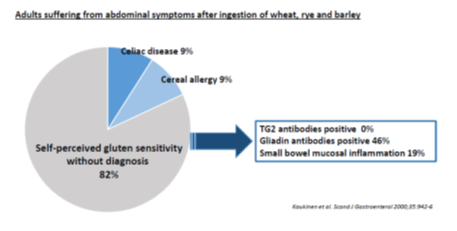 In addition to celiac disease, other conditions related to the ingestion of gluten have also emerged as health care concerns in Finland and worldwide. We have shown that among individuals who self-report symptoms in response to gluten ingestion, 9% suffer from celiac disease, 9% from wheat allergy whereas in the rest of the 82% no apparent cause for the symptoms can be found and thus they likely suffer from an entity called non-celiac gluten sensitivity. These individuals experience distress when eating gluten-containing products and show improvement when following a gluten-free diet. However, the condition is clearly distinct from celiac disease as none of these individuals have celiac disease-specific transglutaminase 2 autoantibodies but may have mild inflammation in the small bowel mucosa. Moreover, half of these individuals have against wheat gliadin in their serum. Such antibodies positivity has been associated with gastrointestinal symptoms and mucosal inflammation at population level. We will continue to study this novel disease entity and the reactivity against gluten-containing products.