Researchers in the CoEBoC have developed an in vitro model for cardiac ischemia-reperfusion using human induced pluripotent stem cell-derived cardiomyocytes (hiPSC-CMs). Ischemic heart disease is a major cause of death worldwide, but good models for the disease and drug testing have been hard to come by and thus, functional human based models are required. The aim of the study was to develop a platform to evaluate the hiPSC-CM functional, structural and molecular responses to oxidative stress combining a platform enabling precise control and real-time monitoring over oxygen concentration with the hiPSC-CM-based cell model.

The results showed that during hypoxia, the beating frequency of the hiPSC-CMs decreased initially but recovered close to baseline level before the initiation of the reoxygenation, indicating of adaptation of the hiPSC-CMs to hypoxic conditions. During reoxygenation, the beating frequency typically first surpassed the baseline before settling down to the values close the baseline. Also, changes in the field potential propagation as well as de- and repolarization times were observed during hypoxia and reoxygenation. Hypoxic treatment slowed the field potential propagation throughout the hiPSC-CM sheet, increased the depolarization time and decreased the repolarization time. These changes were reversed during reoxygenation. Structural changes in hiPSC-CMs included disorganization of sarcomere structures after hypoxia and reoxygenation, supported by decrease in the expression of sarcomeric proteins. Gene expression studies showed also significant increase in the expression of gene encoding glucose transporter 1, indicating enhanced glycolytic metabolism typical to ischemic stress. 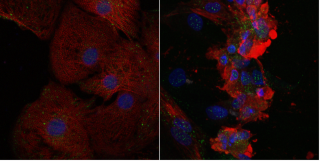 The findings in this study indicate, that despite their immature phenotype, hiPSC-CMs can be utilized in modeling ischemia-reperfusion injury. As the first publication modeling cardiac ischemia-reperfusion, this research is the basis for the development of more advanced ischemia models utilizing the 3D cardiovascular constructs under development in the CoEBoC consortium.

The research was done in collaboration of two research groups of Tampere University, Heart Group and Micro- and Nanosystems Research Group. Collaboration between research groups included sharing equipment and knowledge on how to use it, as well as brainstorming on different obstacles occurring during the experiments and developing new analysis methods for the acquired data. Collaboration with researchers from different fields allows wider perspective and fresh ideas, as each has their own expertise and background to reflect on. No one can know everything, but combining knowledge of several researchers from different fields can give deeper understanding and analysis methods on multi-disciplinary topics.