The Centre of Excellence in Body-on-Chip Research focuses on the development of human-based in vitro applications including the cocultures of several tissue types. Here, the joint efforts of Neuro, Heart and Micro- and Nanosystem Research groups resulted in a completely novel, human-based and electrophysiologically functional cardiac innervation on a chip. The grounds of this work are based on strong knowledge on stem cell biology, in vitro culturing of human neurons and cardiomyocytes and microfluidic solutions developed in the groups earlier.

Human heart is innervated and regulated by the cardiac autonomic nervous system (cANS). The heart and cANS undergo comaturation during the embryonic development and the pathological conditions can progress to cardiovascular diseases. Here, the in vitro coculture system of human induced pluripotent stem cells (hiPSC)-derived neurons and cardiomyocytes on a compartmentalized 3D3C chip showed the formation of physical and functional connections between the two cell types. The 3D3C chip isolated neurons in their respective compartment, allowing the axons to grow through the microtunnels into the adjacent compartment to interact with cardiomyocytes. The separate medium chambers for each compartment enabled the culture both cell types in their respective media. The 3D3C chip allowed mimicking the in vivo axon-mediated interaction between the cANS and heart.

This model can be utilized in the future studies of neuromuscular junctions in disease modeling, drug screening and toxicity assays as well as in the studies of comaturation of both cell types.

The publication is now available in International Journal of Molecular Sciences. 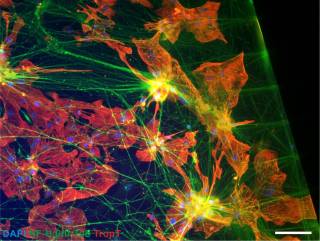