During the summer, Venla Harju had a lot to celebrate. She won the European Championship in orienteering and had also a great success in the World Championships. The cherry on top was the advancement of Harju’s “another” career, that is, her PhD studies at Tampere University in form of research publication of her work.

Venla Harju, a PhD student and a professional athlete, is no stranger to success. After starting orienteering at the age of six, she has achieved multiple World Championship medals and most recently was crowned as European Champion in long distance and awarded a bronze medal in middle distance orienteering. Along with these great accomplishments, Harju just published a scientific article together with Noora Räsänen and other co-authors titled: “Practical guide for preparation, computational reconstruction and analysis of 3D human neuronal networks in control and ischaemic conditions”. “The summer certainly was successful” Harju smiles. “After receiving a sports grant at the start of this year I decided to focus more on orienteering during the summer, which paid off. But to get the publication out at the same time was amazing.”

Not always the smoothest ride

In Harju’s scientific work, 3D neuronal cultures in hydrogels predisposed to ischemic conditions were surveyed with multiple different image analysis software to develop automatized image analysis process. Eventually, Imaris Microscopy Image Analysis software was chosen for the quantification of the neuronal cultures due to its features in neuronal soma detection. Harju et al. were able to show quantifiable differences in neuronal network properties in 3D cultures as well as detect morphological changes in networks after creating ischemic conditions. Even with these great results, the article was under revision for a year and finally after two resubmissions was accepted for publishing. “A huge thank you belongs to my co-worker Noora Räsänen who did lot of practical work and continued to work with us even after she left for other responsibilities” Harju praises. “Also, research grants from the Instrumentarium Science Foundation and the Finnish Red Cross Blood Service made it possible to accomplish this work.”

One might wonder how it is possible to do all this simultaneously, competitive sports, and PhD thesis while also having a small daughter at home. For Harju, the key has been to find the balance between training, competing, research and family. “I like to focus on quality over quantity”, Harju says. “There’s a stigma both in sports and research that one must work around the clock which troubles me. When you do something, give it your all but it is important to listen to yourself, both body and mind. And the calendar” Harju laughs,” I could not live without it.” 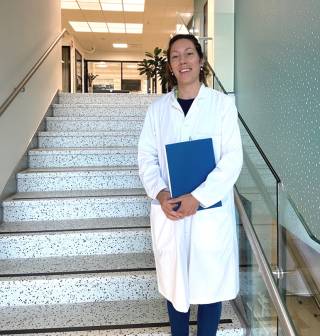 Can you spot similarities between sports and research?

Sports and research, of course, are completely different worlds but they are not so far from what they might seem at first. A need for perseverance and belief on own work is essential. There can be months, even years of hard work behind the success, whether it is a publication, successful grant application or European Championship. According to Harju, that is both the beauty and the harshness of these worlds: “Nothing beats the feeling of accomplishing your goals, but failures unfortunately are part of the process as well. This is where the role of the family, coach, supervisors, and co-workers is highlighted. It would be impossible to achieve anything without great people around me, which I am always grateful for.”

What is in store next for you?

Currently, Harju’s PhD thesis “3D human neuronal cell platform to model ischemic brain stroke in vitro and to study potential treatment method”, is halfway done. The next already ongoing step is to continue with hypoxia studies with neurons utilizing microelectrode arrays (MEA) and later combine this with developed image analysis methods to better model ischemic stroke and even the healing process after the stroke. “We hope to utilize these techniques not only in ischemic stroke modeling but more widely in 3D neuronal models and drug screening studies as well. The aim for the future is to reduce and replace the animal models used currently” Harju sums up.  When it comes to sports Harju has her eyes already on the next year’s World Championships as she earned a place there with her success this summer: “I would also love to compete in the 2025 World Championship here in Finland. Competing on the big stage in the home country in our beautiful forests is always a special feeling.”