The ACM defines a research artifact as "a digital object that was either created by the authors to be used as part of the study or generated by the experiment itself." Find the most recent version of several of our FOSS projects from our GitLab page. Even better—collaborate with us and submit PRs!

This artifact is hosted at https://opensslntru.cr.yp.to/demo.html, and is also archived on Zenodo. It consists of a demo of a transparent integration of fast post-quantum cryptography, based on NTRU Prime (an alternate candidate in Round 3 of the NIST PQC standardization process for public-key encryption and key-establishment algorithms), in the TLS 1.3 handshake.

The demo has two parts: a server side and a client side. The first uses stunnel for TLS termination and is also replicated online at https://test761.cr.yp.to; the latter uses Epiphany, the Gnome Web Browser, to initiate TLS connections as part of regular web browsing, with no noticeable latency for the end user. Both parts do not rely on source changes in the codebase of the mentioned applications to support post-quantum key establishment, but rather rely on minimal patches to the underlying OpenSSL library to handle static codepoints for the new PQC KEM key share groups, and on a pluggable ENGINE, which transparently interfaces OpenSSL with novel standalone libraries providing fast implementations for NTRU Prime.

The demo also includes the other tools and instructions that allow to reproduce the results described in Section 4 of the paper OpenSSLNTRU: Faster post-quantum TLS key exchange, accepted at the 31st USENIX Security Symposium (USENIX Security 2022).

This is an artifact from the paper HyperDegrade: From GHz to MHz Effective CPU Frequencies, accepted at the 31st USENIX Security Symposium (USENIX Security 2022). It uses benchmarking applications from the BEEBS framework (Open Benchmarks for Energy Measurements on Embedded Platforms) to demonstrate the HyperDegrade technique on chips featuring HyperThreading, including traditional Degrade and no performance degradation as baselines. It can be used for reproducing the results in Section 4 of the paper, including Tables 8-9.

This PoC simulates an Online Template Attack against wolfSSL v4.4.0 side-channel protected ECC scalar multiplication implementation. We use an emulator based on TracerGrind to capture victim and template traces. It demonstrates the feasibility of one the attacks carried out in the paper Online Template Attacks: Revisited published at TCHES 2021.

This dataset and software tools are for reproducing the research results related to CVE-2020-12399. It contains the remote timing data used in Section 4 of the paper, and later in Section 9 for the lattice attack. The measurements were collected over Gbit Ethernet between a client (attacker) and server (victim) connected by a Cisco 9300 series enterprise switch. We released the data to ensure reproducibility and refute doubts on the feasibility of remote timing attacks with lattice-based cryptanalysis.

Read more about it in Section 4 of the paper, where we steal the private key of a server across a switched network. We also proposed and evaluated the fix for NSS.

During RSA key generation, bignum implementations used a variation of the Binary Extended Euclidean Algorithm which entailed significantly input-dependent flow. This allowed us to perform electromagnetic-based side channel attacks to record traces leading to the recovery of the secret primes.

Read more about it in Section 8 of the paper. Mozilla merged our patch to harden both the GCD and modular inversion functions against timing attacks.

In Mozilla’s NSS, we discovered that nonce padding applied as a countermeasure to CVE-2011-1945 at high level ECDSA signing functions was in fact being removed in lower level scalar multiplication wrappers. This put ECDSA private keys at risk to remote timing attacks. Read more about it in Section 5 of the paper. Mozilla merged our patch eventually, after lower-level mitigations.

In ECDSA signing, we discovered that for curves NIST P-384 and NIST P-521, Mozilla’s NSS used a variable-time version of scalar multiplication function previously known to be vulnerable CVE-2018-5407. We leveraged EM side-channels to extract the ECDSA nonce information and recovered the 384-bit ECDSA private key using less than a hundred signatures. Furthermore, by using software controlled side-channels, we exploited the scalar recoding algorithm used in ECDSA point multiplication and retrieved the private key by acquiring only a handful of signatures.

Read more about it in Section 6 and 7 of the paper. Mozilla merged our patches for NIST P-384 and NIST P-521 that are constant-time stacks powered by ECCKiila and fiat-crypto.

We presented ECCKiila in Set It and Forget It! Turnkey ECC for Instant Integration, that fully automates the implementation, testing, and integration of ECC stacks.

This artifact contains one of the vulnerabilities included in ECCKAT, described in Section 3.4 ("OpenSSL: ECC CDH vulnerability") in the preprint. It demonstrates bypassing Elliptic Curve Co-factor Diffie Hellman (ECC CDH) security in an OpenSSL beta release, which should fail to derive a shared key if a peer point is not a multiple of the generator. We developed the fix for OpenSSL in PR 6535.

The data was used to carry out the projective coordinates attack against Libgcrypt in Section 6 of the article.

While converting ECC points from projective to affine coordinates, Mbed TLS failed to use a constant-time modular inversion function. This potentially put private keys at risk. Read more about it in our paper.

While converting ECC points from projective to affine coordinates, NSS failed to use a constant-time modular inversion function. This potentially put private keys of P-384 and P-521 at risk. Read more about it in our paper.

While converting ECC points from projective to affine coordinates, wolfSSL failed to use a constant-time modular inversion function. This potentially put private keys at risk. Read more about it in our paper.

This dataset relates to CVE-2019-18222 and contains the per-signature post-processed ECDSA nonce candidates. It also contains tooling that, after factoring a candidate, will enumerate the ECC keys to test for the correct nonce. The dataset and tooling were used to produce some of the Mbed TLS results in the paper and released to ensure reproducibility.

We discovered a side-channel vulnerability in the Mbed TLS implementation of a side-channel countermeasure. For ECDSA signatures, Mbed TLS uses multiplicative blinding of the nonce, but fails to reduce the product. Obtaining a trace of the subsequent inversion, attackers can factor the product and enumerate ECC keys.

Read more in the Mbed TLS Security Advisory and our paper.

This dataset relates to CVE-2019-1547, used to produce Figure 4 in the paper and is part of the remote timing attack data (Section 4.1). The included software tools help validate the data as well as show how to parse the JSON.

We introduced the concept of Certified Side Channels where many cryptography libraries make various runtime decisions when parsing private keys that leads to side channel vulnerabilities later when using the keys.

"We further show-case the value of the tooling by presenting two novel discoveries facilitated by Triggerflow: one leak and one defect in OpenSSL."https://t.co/FFfrkrwYtH

We also submitted two security-related PRs based on the results: 8253 and 8254 are now merged in OpenSSL. 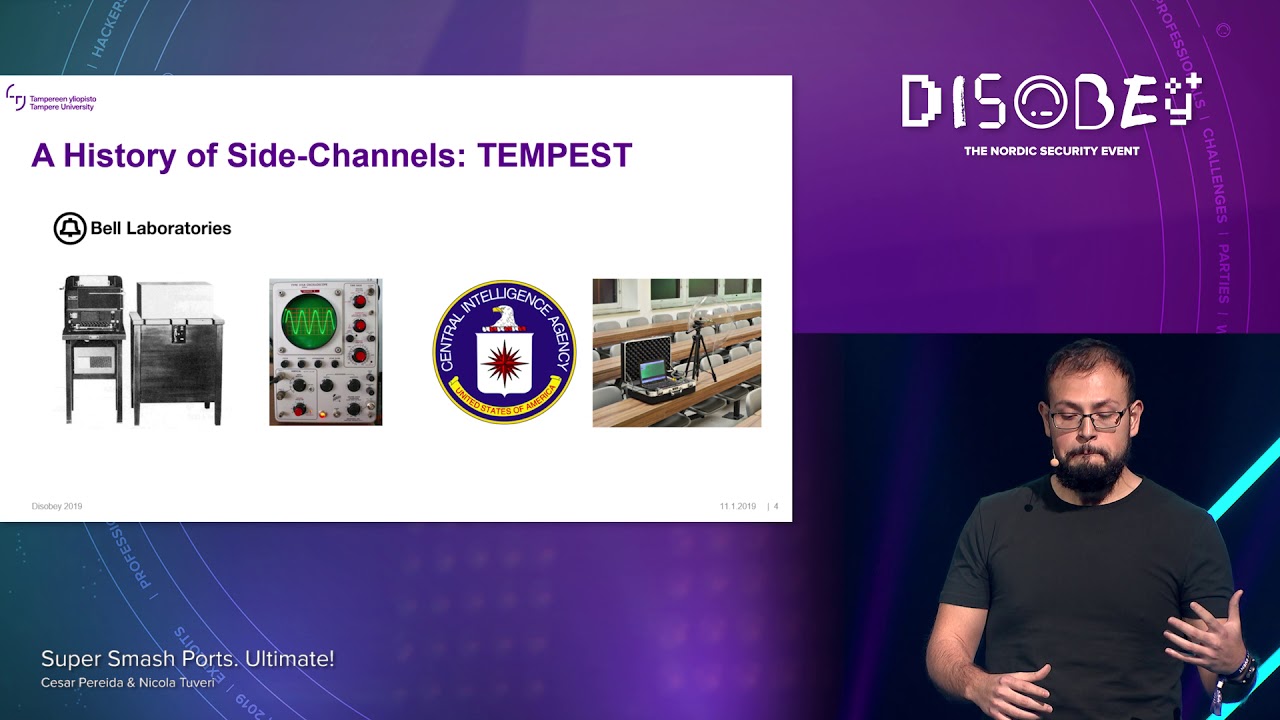 We backported the security fix to OpenSSL in 7593, now merged. 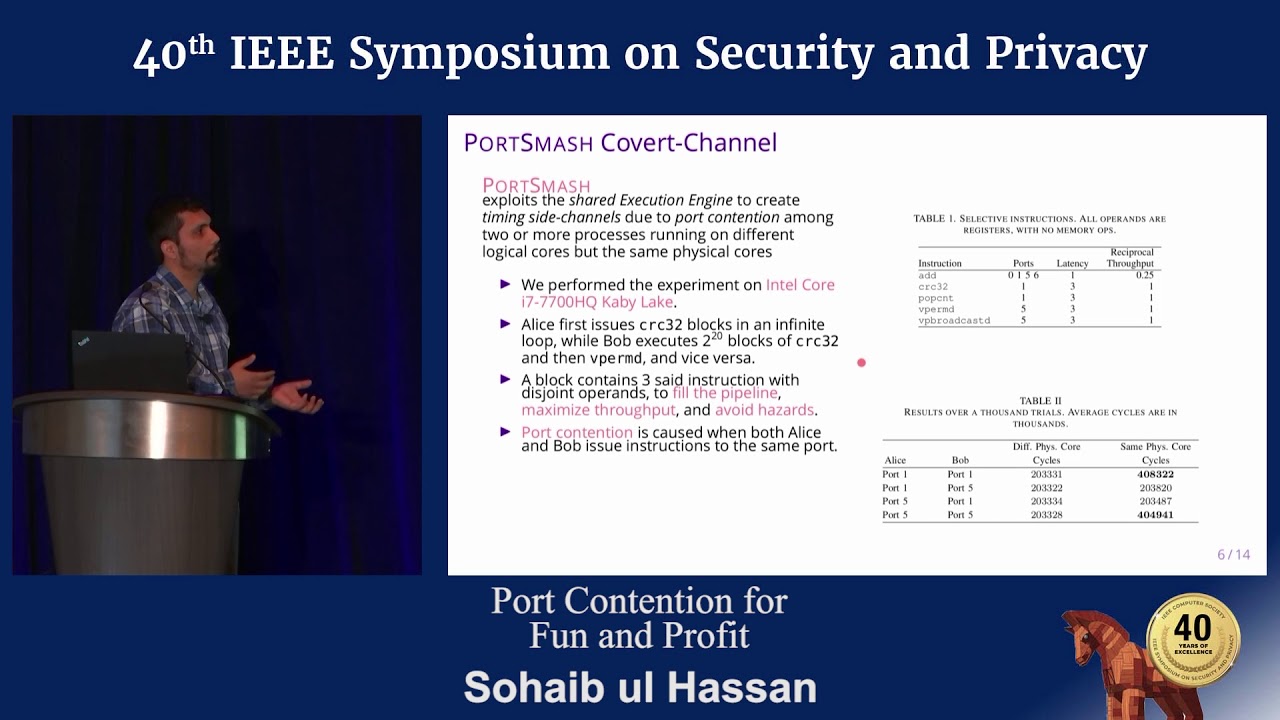 We applied PortSmash to steal the private key (elliptic curve P-384) of an OpenSSL-linked TLS server. Find more information in our oss-security post.

We also submitted several security patches to OpenSSL: 6009 6066 6501 6521. The TVLA results showed significant improvement after they were merged.

I just learned about CVE-2018-0737 (cache timing attack on RSA keygen in OpenSSL: https://t.co/x9EfKNyQqu ). This is a coincidence; I had planned RSA keygen for a long time, and I made it constant-time out of a matter of principle. But yeah, turns out it matters.

Find more information in our oss-security post and watch the video!

An ENGINE gluing together OpenSSL and NaCl-derived crypto. This project aims at developing an OpenSSL engine rigging cryptosystem implementations derived from NaCl into OpenSSL.

libsuola is meant to demonstrate a framework that can be used to bridge the gap between novel scientific results and real world applications.

We discovered a vulnerability in OpenSSL’s ECDSA signing implementation, affecting the 1.0.1 branch. The weakness is due to variable-time modular inversion, even when featuring P-256 constant-time scalar multiplication.

Exploiting this vulnerability, we performed a side-channel cache-timing attack that allowed us to recover private keys from OpenSSL-linked TLS and SSH servers after a small number of attacker-initiated connections. 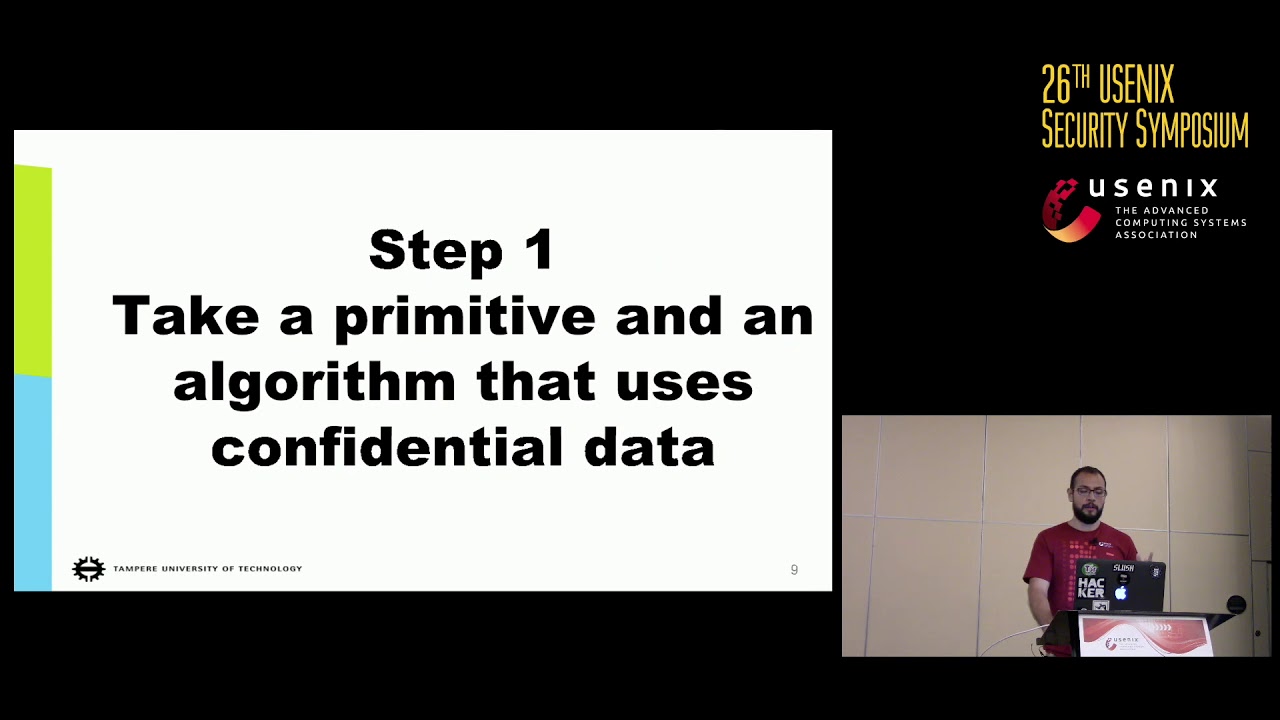 We discovered a bug in OpenSSL’s DSA implementation that prevents the DSA signing algorithm from running in constant time even with appropriate flags set. This bug went unnoticed since 2005.

I've been told that OpenSSL advisories are going out pretty soon again because of an attack like that. Wait a week or two.

Out today: This is the OpenSSL side-channel vulnerability I mentioned last week; now on ePrint. Also CVE-2016-2178. https://t.co/h0mT7bJ7Kj

Exploiting this bug, we performed a side-channel cache-timing attack against two protocols that rely on OpenSSL: SSH and TLS. 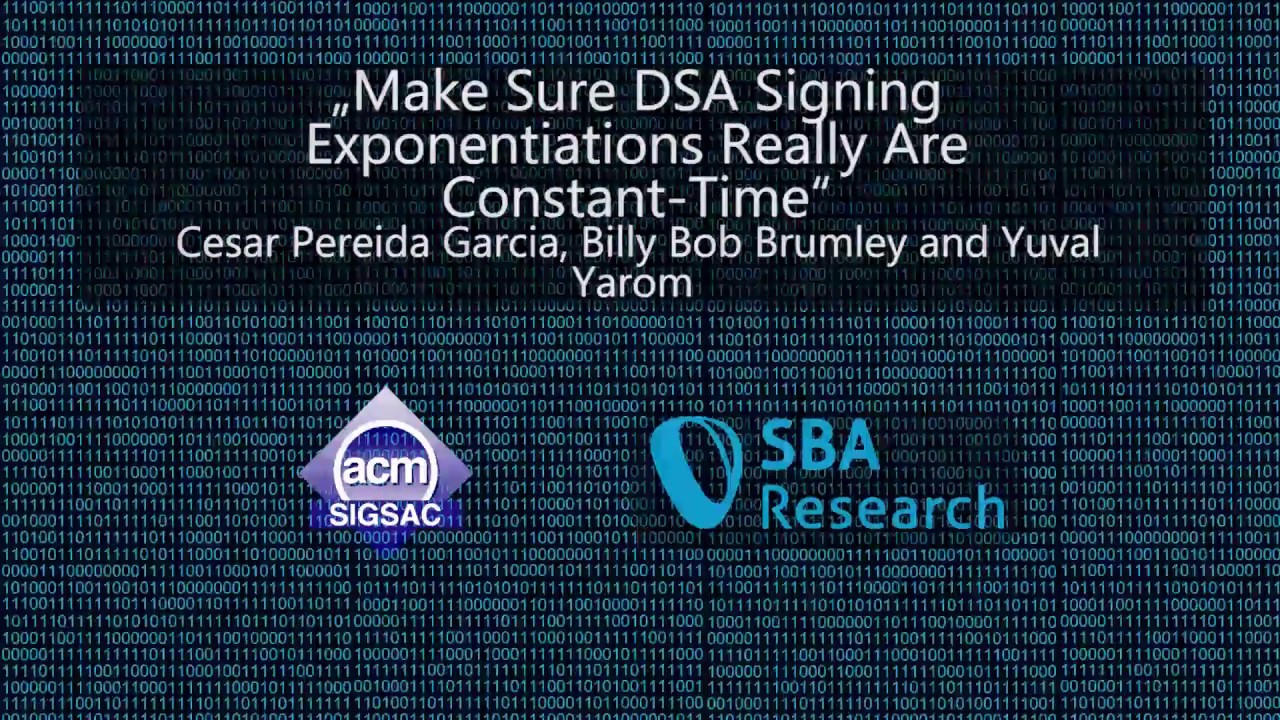