Describes the rationale and design of the population-based ProScreen trial combining PSA kallikrein panel (4Kscore) and MRI for prostate cancer screening, with the aim of assessing the extent of overdiagnosis (detection of clinically insignificant cancer) as well as prostate cancer mortality as the main end-point 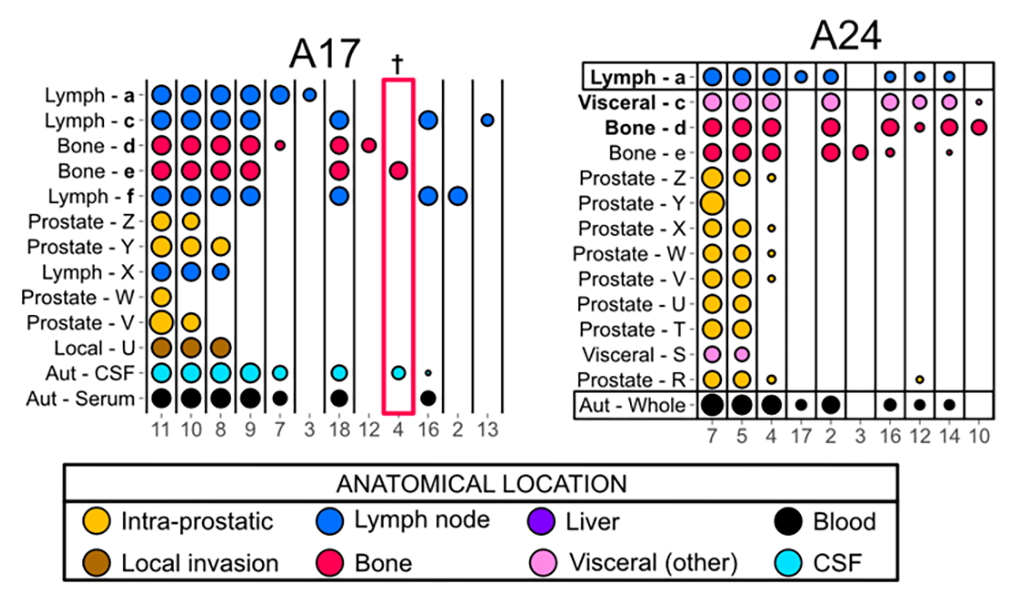 We infer detailed reconstructions of tumor phylogenies in ten prostate cancer patients with fatal disease and investigate them in conjunction with histopathology and tumor DNA extracted from blood and cerebrospinal ﬂuid. One dominant lineage emerges that initiates and drives systemic metastasis. Routes to metastasis differ between patients, and likely genetic drivers of metastasis distinguish the metastatic lineage from the lineage that remains conﬁned to the prostate. Body ﬂuids capture features of the dominant lineage, and subclonal expansions that occur in the metastatic phase are non-uniformly represented. Cerebrospinal ﬂuid analysis reveals lineages not detected in blood-borne DNA, suggesting possible clinical utility. 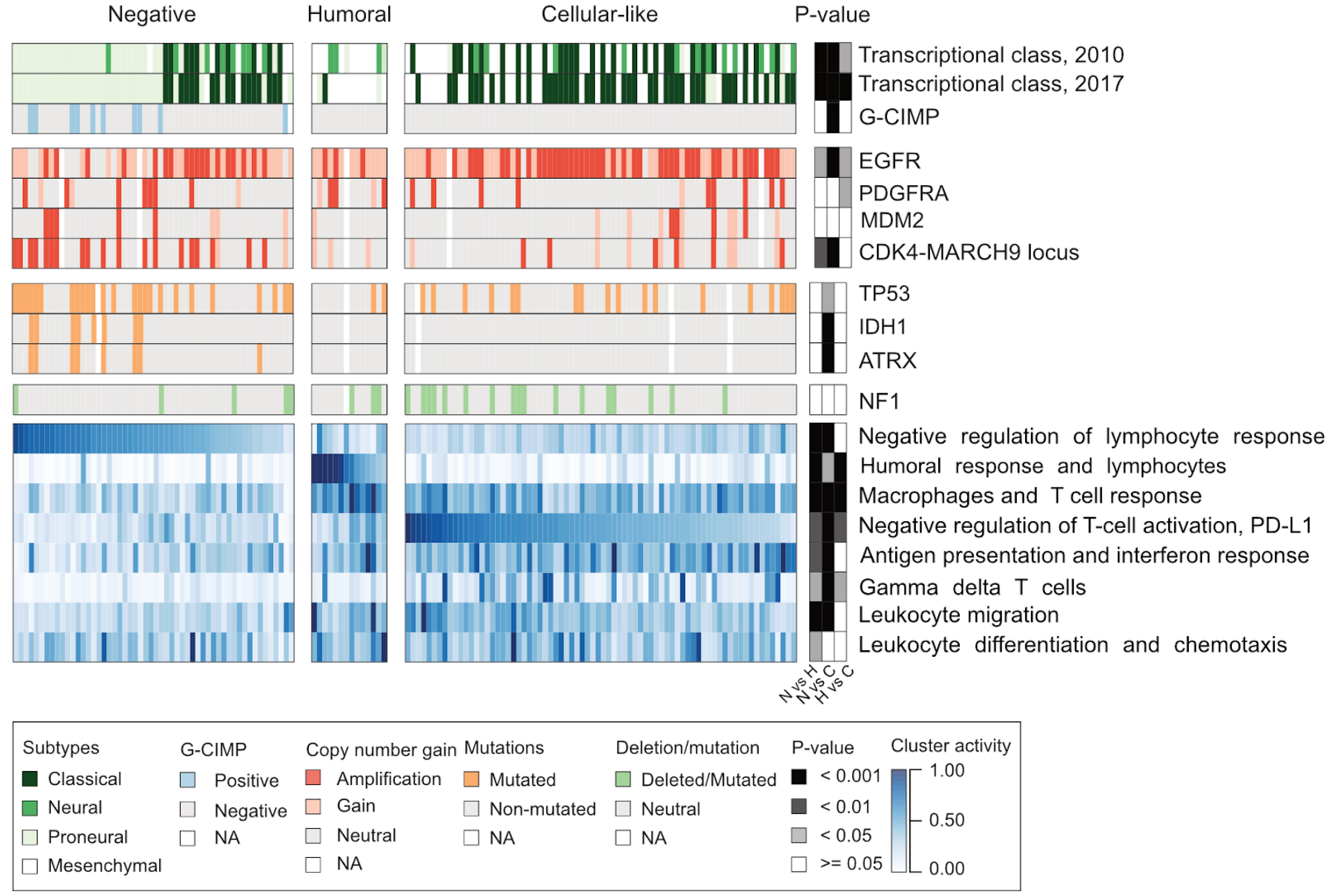 Understanding the nature of immunosuppression in malignant tissue is important for successful cancer treatment through immune system modulation. In this study, we uncovered high variability in immune system-related responses and in the composition of the microenvironment across glioblastoma (GBM) cohort, suggesting immunologic diversity. Our analysis identified three GBM subgroups presenting different adaptive immune responses: negative, humoral, and cellular-like. These subgroups and immune cell compositions were associated with typical alterations, such as CDK4 amplifications or inactivating NF1 alterations. All IDH-mutated samples were in the negative group, and they showed lower expression and higher DNA methylation of MHC-I genes. 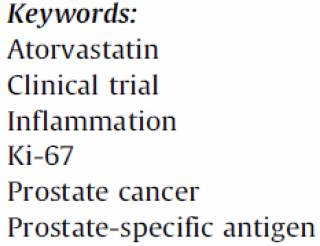 Artificial intelligence for diagnosis and grading of prostate cancer in biopsies 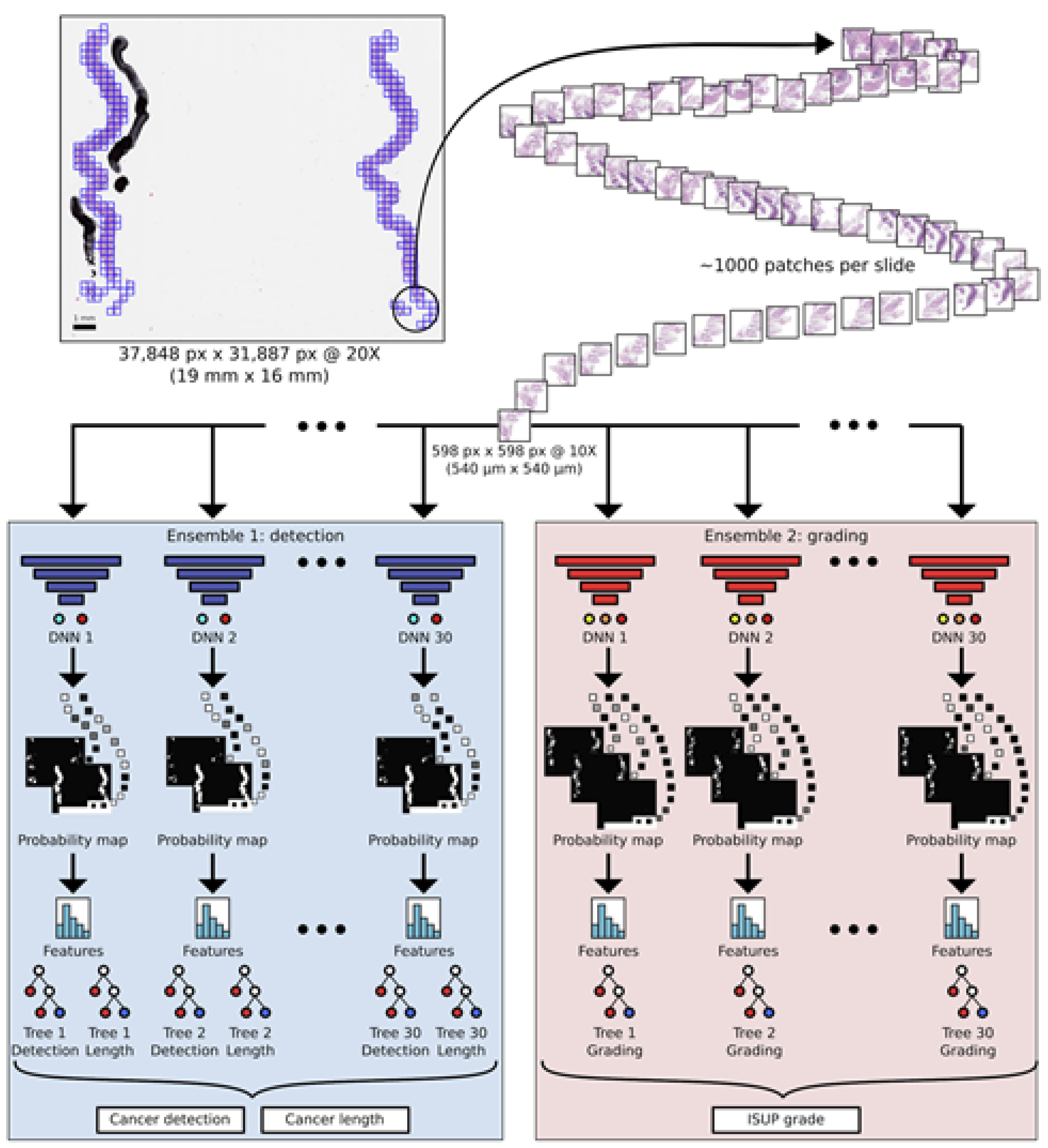 We report pathologist level accuracy for artificial intelligence based detection, length estimation and grading of prostate cancer from histopathological images in a population based diagnostic study in a collaboration study led by researchers at Karolinska Institutet.

Artificial intelligence for diagnosis and grading of prostate cancer in biopsies: a population-based, diagnostic study. 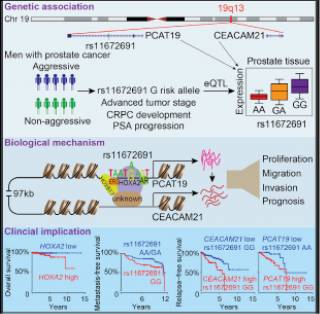 Long noncoding RNAs (lncRNAs) play pivotal roles in cancer development and progression, and some function in a highly cancer-speciﬁc manner. Here, we investigated a group of lncRNAs that we previously identiﬁed to be aberrantly expressed in prostate cancer, called TPCATs. We report that the majority of TPCATs investigated here are strongly associated with androgen receptor and other cooperative TFs, most importantly with ERG, in fusion-positive tumors. We found that the expression of many of the TPCATs was regulated by these TFs. In addition, three of the TPCATs were independently associated with PC progression, most notably EPCART that we also found to promote the migration and proliferation of the PC cells in vitro. Together, these ﬁndings demonstrate that EPCART has functions relevant for PC progression. 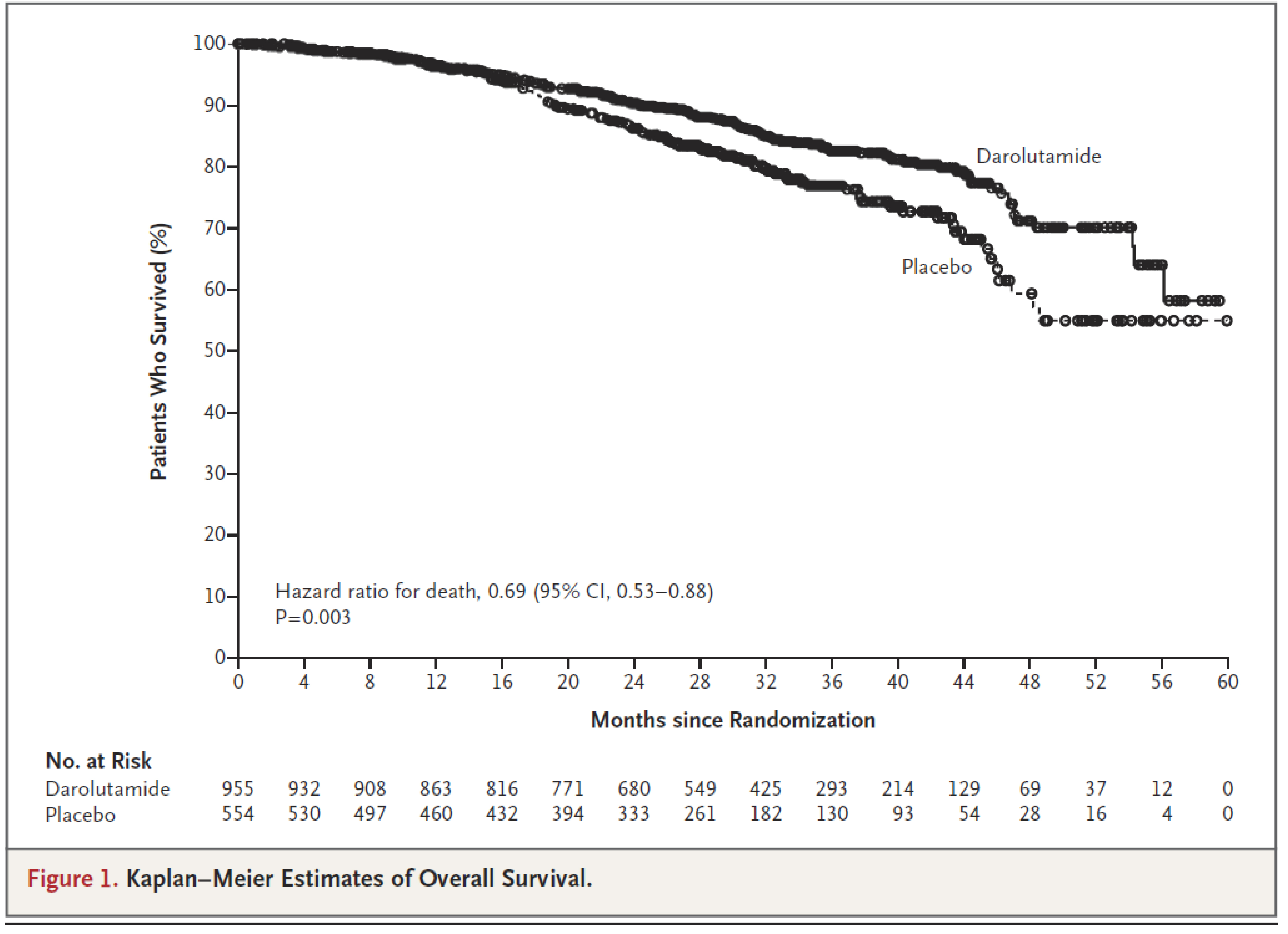 In this double-blind, placebo-controlled trial, we randomly assigned 1509 men, in a 2:1 ratio, to receive darolutamide (955 patients) or placebo (554 patients) while they continued to receive androgen-deprivation therapy. After the results of the primary end-point analysis were found to be positive, unblinding of the treatment assignments occurred, and patients in the placebo group were permitted to cross over to receive open-label darolutamide treatment.Among men with nonmetastatic, castration-resistant prostate cancer, the percentage of patients who were alive at 3 years was significantly higher among those who received darolutamide than among those who received placebo. The incidence of adverse events was similar in the two groups. (Funded by Bayer HealthCare and Orion Pharma; ARAMIS ClinicalTrials.gov number. 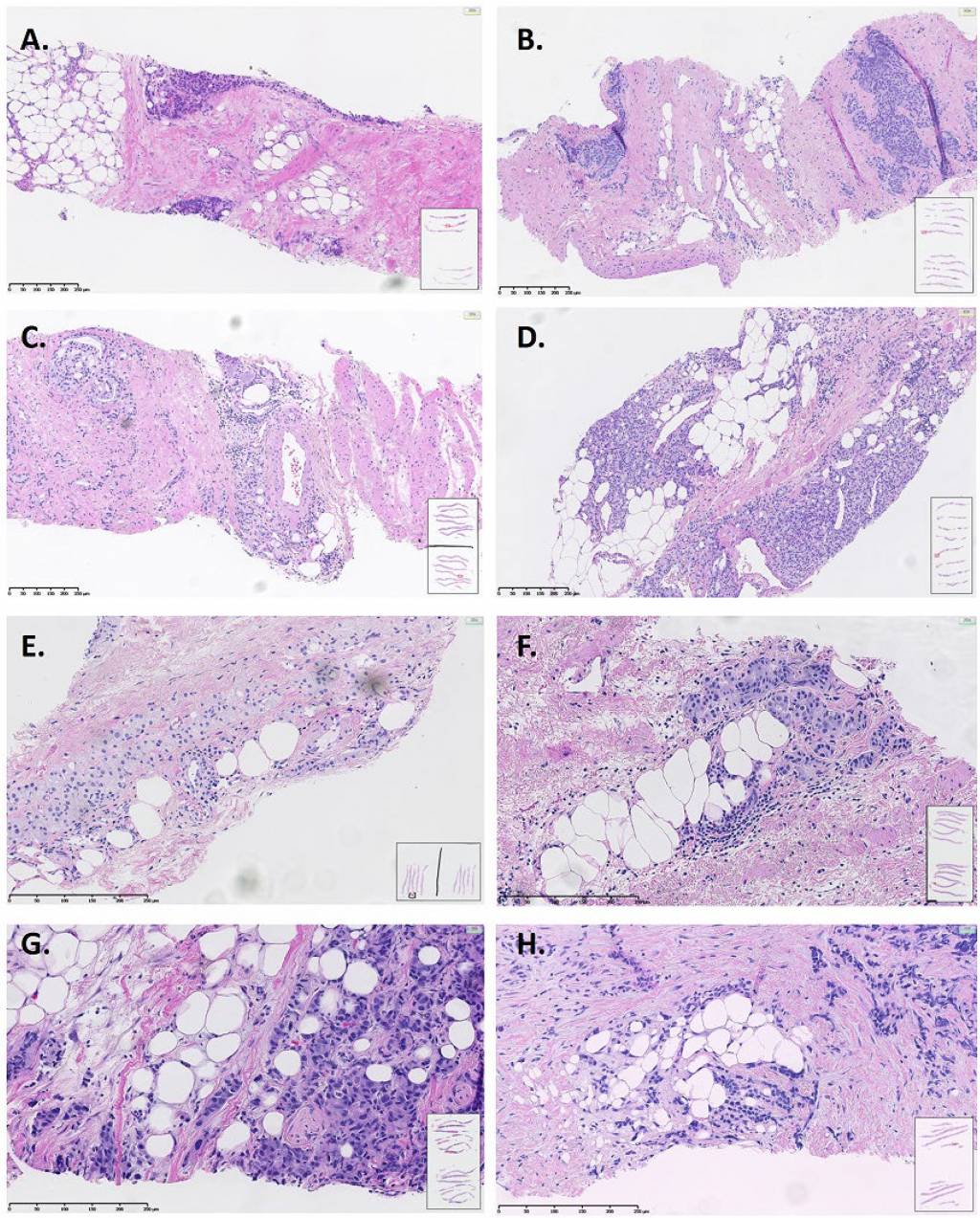 Extraprostatic extension (EPE+) in a needle biopsy may be more common than previously thought. Approximately one of six high grade prostate cancers harbor EPE+ in core biopsies. EPE+ is associated with highly adverse features of prostate cancer, making its reporting obligatory. More studies are needed to establish the predictive and prognostic value of EPE+ in needle biopsies