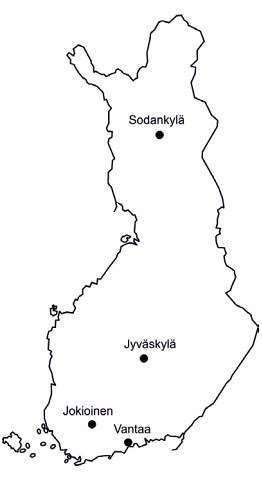 In hygrothermal modelling of structures, it is essential to examine the behaviour of the structures in outdoor air conditions that represent the environmental extremes of moisture stress. A climatological test year for building physics refers to these conditions of a full year in a specific location.

Finding the critical test years is particularly important because no safety factors are used for outdoor air conditions in the building physical examinations.

The datasets, comprising years 1980–2009, contained the following variables relevant for building physics studies at an hourly resolution: temperature, relative humidity, wind speed and direction, rain, driving rain, and direct and diffuse solar radiation. The above-mentioned factors vary with the geographical location of the building and the cardinal point. In addition, the outdoor air conditions near the building are also affected by the position and shape factors of the building that cause a so-called microclimate.

The building physics research group and The Finnish Meteorological Institute have determined critical test years in Finnish climate in regards to the hygrothermal performance of structures. The test years were determined in the FRAME-project so, that they corresponded to actual calendar years. When choosing the test years, the following factors were taken into account:

The most critical climatological test years

The following principles were followed in choosing the climatological test years of the current and future climates:

The most critical years were Vantaa 2007 and Jokioinen 2004, and they were also generally valid for most types of envelope assemblies. From these two, the one that is used in hygrothermal modelling depends on the analysis case: The current climate Vantaa 2007 is used when the rain affects the internal moisture behaviour of a structure (i.e. there is a leakage). In the current climate, Jokioinen 2004 is more critical when the internal part of the structure is protected from the rain. These defined test years can be used throughout Finland.

The Finnish Meteorological Institute produced artificial weather models for years 2030, 2050 and 2100 to reflect the anticipated effects of climate change. The climate scenarios are based on the A2 greenhouse gas scenario, according to which emissions would continue to increase during the entire 21st century (the pessimistic A2-development option was selected so that the results would be on the safe side).

The critical test years of the current climate, Vantaa 2007 and Jokioinen 2004, are typically the most critical in the 2050 and 2100 climates as well. Future climates are therefore based on Vantaa and Jokioinen. However, the user must take into account that the differences between the observational and modelled future weather datasets in the relevant statistical quantities are dependent on the climate model projections, either precisely or approximately.

The calculation code and source information for the hourly long-wave radiation values, short descriptions of climatological quantities, and references to the publications are presented on Github. The code found through the link also compiles ready-made weather data files for the most common building physical simulation programs, in this case wac files for WUFI Pro and 2D, ccd files for Delphin 5, and csv files common use. Using the files reserved for Delphin 6 requires compiling them as c6b files with a separate CCM Editor, which is freely available on the webpage of the developers of Delphin. Result files can also be used with other programs, such as COMSOL Multiphysics. In the files the outdoor relative humidity is given as relative to liquid water (RHe_water), which is common practise in atmospheric sciences and most RH-sensors, but also as relative to ice (RHe_ice), which is the custom in WUFI and Delphin.

The weather data for calculation programs is downloadable (approximately 15 MB).

The code and weather data files for building physical simulation programs accessible through the links presented above are free to use both commercially and non-commercially. The aim has been to compile the material with care, but no guarantee of its correctness or suitability is given. It is recommended that the functionality and suitability of the code and weather data files are tested before actual use. If you notice an error, you can report it via email.