The mould risk is described with a mould index M, which ranges between 0 and 6, and depicts the increasing amount of mould on the surface. The mould risk is calculated from hourly temperature and relative humidity values. The model also takes into account mould decline when conditions are not favourable for mould growth (too cold or too dry). The mould index only describes the general growth of mould on materials and therefore says nothing about the mould types, so it can’t be used to evaluate how hazardous the mould would be.

Moulding properties of materials can be estimated based on the beginning of mould growth, the maximum amount of mould, and the mould decline. It can usually be stated that the faster the mould growth begins, the higher the mould maximum can be and the faster it will decline in unfavourable conditions. Autoclaved aerated concrete is an exception.

The pictures below illustrate the effect of different mould sensitivity classes on the mould growth rate and maximum mould index in constant conditions. 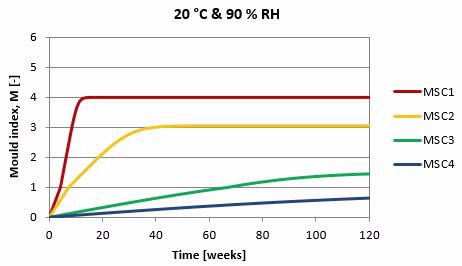 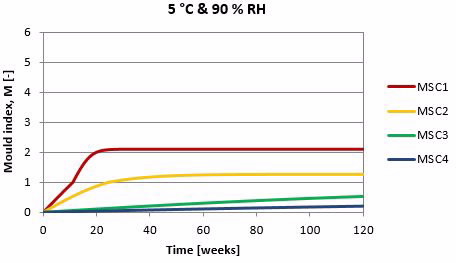