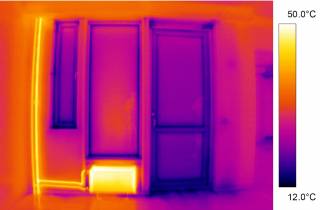 The aim of an infrared camera shoot is to study the thermal performance of a building’s exterior structures and the functionality of the insulation. Additionally, air flow routes, the physical performance of the structures, moisture damages, as well as the functionality of HPAC- and electrical equipment. The experiment must be done during cloudy weather and the best time is between November and April, since the temperature difference between indoor and outdoor air is large enough then. Before the experiment the pressure and temperature differences between indoor and outdoor air, the relative humidity of the space, as well as wind direction and speed are determined.

Infrared camera shoots are usually done from the inside, but they can also be done from the outside or the cold side of the insulation (attic). Inside the shooting distance is 2-4 m and outside it is less than 10 m, if possible. The building is shot according to a contract, either completely or focusing on known problems. During a shoot average temperatures of surfaces or point temperatures can be determined.